Tamasha in Tudikhel : This is how the film was shown for the first time

When the world's first film was born in France in 1895, Nepal was ruled by the Jahaniya Rana. Due to which, no film could be made in Nepal till sixty five years after the first general release of the film.

In 1951, i.e. Bikram Sambat 2007, a film was made in Nepali language for the first time. The film was made not in Nepal but in Kolkata, West Bengal, India. Fifteen years later, in Bikram Sambat 2022, film production has started in Nepal. B.S. The first Nepali language film made in India in 2007 was 'Satya Harishchandra'. The first Nepali film to be made in Nepal in 2022 B.S is 'Aama'.

Looking at the facts, even though the production of films in Nepal started only from 2022 BS, the exhibition of foreign language films has already taken place. In the first issue of 'Gorkhapatra' published on Monday, 24th Baishakh, 1958 BS, an advertisement was published under the headline 'Tamasha in Tudikhel'. It is said that during the reign of the Rana Prime Minister Dev Shamsher, a free film was shown to the public on that day during his and his wife's journey to Sindur. Therefore, this date has been taken as the first free film exhibition for the general public in Nepal. However, it cannot be denied that Rajarani, Rana, the Prime Minister and their families, relatives, brothers and courtiers used to watch the film before that. This was the behavior of the advertisement published in 'Gorkhapatra'. 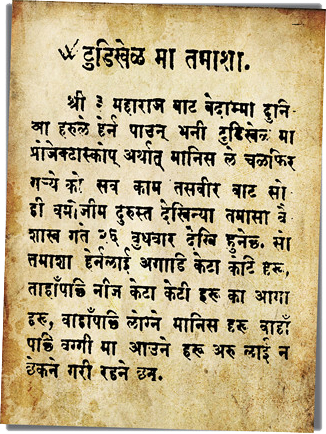 'Bedamma from Shri 3 Maharaj, the project will be held in Tudikhel from Wednesday, Baishak 26,  so that all the work done by the projektoscope in Tudikhel so that the world can see. To watch the show, the boys and girls in front, the mothers of the boys and girls after them, the men behind them, the people who come after them in the wagon will stay there without touching others.'

There is another fact that the film was screened 32 years later. During the reign of Prime Minister Juddha Shamsher, Friday, September 3, 1990. Total of four films, including English and Hindi, were screened at the then nachghar at Singha Durbar. The films were brought from abroad by Kunjar Shamsher and screened at the government level under his auspices. After that, about fifteen to twenty foreign films are screened in the court of the king and the Rana every year. It is mentioned on page 110 of the book titled 'Biography of General Narasamsher Jung Bahadur Rana' presented by Hemant Shamsher Rana.

Short films were made before story films

The first film in Nepali language 'Satya Harishchandra' was released in 2007 B.S. The first film made in Nepal was 'Aama' in 2022. However, it has already been found that short films were made during the Rana rule.

In 1931, Arnold Beck from the Netherland visited Nepal. According to Ram Prasad Kandel, Founder President of Nepali Folk Baja Museum and Fellow he was filming various dances, festivals and cultural pageants, including some scenes from Nepal at that time. The dances he shot were kept as short films in the British Library Archive in Kathmandu. The fact that these black and white films are currently kept in the Nepali Lok Baja Museum has been published in the 13 year issue 3 of the bi-monthly magazine 'Baja' published by the Nepali Lok Baja Museum.

Speaking of the documentary, the American Information Service Center in Kathmandu had produced the first documentary on Nepal in 2013 B.S. ‘Himalayan Awakening' was made. In this documentary, it is presented that development and construction work has been going on gradually in Nepal after the political changes of 2007. This documentary has also been prepared with the participation of foreign nationals.